Why Ancient Ritual Postures in the 21st Century 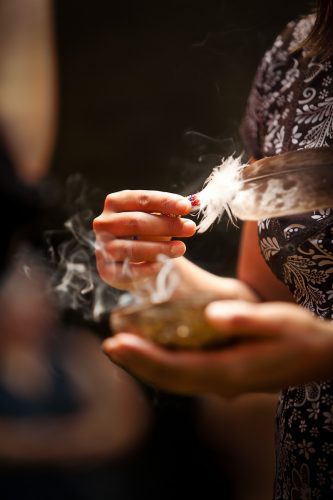 Why would we want to roll back the centuries to what may seem to be primitive times in order to find a spiritual practice? Why not use all the discoveries from neurobiology and contemporary research on the evolutionary stages of adult development to support our search for enlightenment? With Ancient Ritual Postures, the more profound question is: why not integrate both?

When I shared my practice of using Ancient Ritual Postures with my Aunt Maxine some years ago, she quoted a couple of existentialist philosophers. She told me she didn’t have room in her life for primal magic because it did not incorporate the magnificent mind of modern humanity. What she didn’t realize was that it is not an either/or situation, that human consciousness has room for and needs primal magic and Existential philosophy  – and so much more. Most of our ancestors from whom we inherited Ancient Ritual Postures were people who did not have a written language. We don’t really know how magnificent their cosmic understanding may have been. But look at the elegant drawings of animals on the cave walls at Chauvet, in southern France, made with just tallow and charcoal 35,000 years ago. Or the exquisite Running Horned Woman in the Tassili region in Algeria, thought to date from around 8,000 years ago. Or the Venus of Galgenberg, discovered in Austria in 1988 and dating from 35,000 BCE. What are these spectacular works of art telling us about our ancestors who created them and what they understood about our connection with spirit?

As far as we can tell, our most ancient ancestors shared oral traditions from one generation to the next, grandparents to children, wise ones to apprentices. They conveyed the essence of their cosmology and spiritual guidance through art. The cave drawings, sculptures, petroglyphs and pottery figures they left behind show us, among other things, how they used their bodies like keys in a lock to open to the invisible world of the spirits.

The capacity for meaning-making among tribal people is deeply influenced by an inherent “we” consciousness, as compared with the more individualistic “I” consciousness of Western culture. Their wisdom was passed along through stories, ceremonies, and cosmology, and includes an understanding of the reality of the invisible world and subtle energies. These traditions are not written and are conveyed through metaphor, in poetry, song, and dance as well as two- and three-dimensional works of art.

Western culture favors analytic intelligence instead of body wisdom. But psychotherapy, at least, is waking up to the value of engaging the deep and subtle capacities in the physical body to support healing from trauma as well as for integrating consciousness into higher states of well-being and expanded capacity for meaning making. Indigenous “we” consciousness includes a sophisticated somatic intelligence that integrates direct experience in the body and carries that awareness into the mind. Every human has the capacity to orient their awareness to include embodied perception, but cultural values can “cast a spell” that inhibits clear access to somatic intelligence.

“For a person who was born into a culture with this spell, it requires either an extraordinary natural gift or an unwavering, intentional effort to lift the spell and ‘see’ his or her indigenous, somatic intelligence. Even if she is successful at doing so, should she incorporate her indigenous somatic intelligence into her social environment, she would need to develop a new linguistic ethos to anchor this ancient intelligence in the modern mind. It is a daunting task! Therefore, even though most of these western scholars hold an empathetic and reverent attitude towards indigenous culture as an external object, it is difficult for them to experience and identify that indigenous part of themselves internally.” (Spring Cheng, 2019)

In order to support an increasingly global sense of community, we humans are challenged to nurture and integrate somatic, embodied intelligence along with emotional intelligence and the ideology of individual sovereignty. We can integrate “we” consciousness” with “I” consciousness, rather than feel the need to choose one or the other. But as Cheng says, it IS a daunting task in a world that does not really appreciate the cosmological depth and integrity of our most ancient ancestors.

Cheng challenges Ken Wilbur’s model of “transcend and include,” suggesting that we need to embrace earlier developmental stages as part of “dive and enliven” as well. In other words, it is not really transcendence but rather progression in concentric spheres that continues to integrate fluidly among layers of development. Sometimes it is important to be “primitive.”

How can Ancient Ritual Postures help us? In my own spiritual practice with Ancient Ritual Postures over the past 36 years, I have learned how necessary it is to sometimes surrender the sense of control that my ego is accustomed to having. Early in my own practice and with clients and students, I witnessed a fear that loss of ego control would mean loss of consciousness. Even worse, I witnessed a fear of regression into infantile or animalistic states. Students have reported being anxious about being overtaken by primal, instinctual, Dionysian urges that might cause them to lose their minds. As we release the illusion of ego control, we release the cultural idea that mind is supreme. We open to something greater than the idea of who we are. Learning to let go of the intense hold of the “I” consciousness is implicit in opening to “we” consciousness.

In the ritual of using ancient postures, we don’t lose consciousness. Instead, we enter what my colleague James Lawer calls “a zone of ambiguity.” I love the term. We’re still awake and aware, fully functional. But something is different. I’m not “in control” but am witnessing experiences that I open to by choice. Ego likes familiarity and predictability. But in limiting ourselves to the familiar we forego such wonders! It’s like going to Paris and wanting to eat at McDonald’s instead of embracing the fabulous new gastronomic experiences that are available all around you. The expanded state of consciousness is new territory – and delicious! The Socialized Ego, to use Robert Kegan’s term, is the level of personality development in which we are oriented toward doing what is expected of us. The Socialized Ego is what we have internalized as the right way of doing things from the perspective of the dominant culture in which we live. The Western mindset tends to value linearity, order, analysis, labeling, precise timing, and measurements. What can be measured is real; what cannot be measured does not exist. The cultural value is individualism and having a unique identity and contribution.

In indigenous societies, these are not characteristics of the prevailing worldview. As we enter the “zone of ambiguity” in the ritual, we find ourselves losing our grip on many Socialized ways of experiencing the inner world. People who have learned to meditate by emptying the mind are perhaps more comfortable with the process. Other people call it “dreaming while awake,” or compare the experience to getting high on psychedelics.

Whatever the comparison, letting go is an important part of the ritual as well as moving into the indigenous “we” consciousness. In tribal societies the development of an individualistic self with an emphasis on personal accomplishments and acquisitions is shunned. We are not tribal people. But we do have the opportunity to learn to move fluidly from individualism back to an orientation to the body, the earth, and the community.

Integrating Individualism with our Tribal Roots

The goal here, if we must speak in terms of goals, is to integrate both ways of being in the world rather than favoring one or the other. Most Westerners need practices to help us release the firmly entrenched individualism that can impede access to the unbounded intelligence that exists at every stage of development. Levels must be integrated for the wisdom of Self/Other, both/and consciousness. By learning to surrender, we mature.

We are accustomed to abstract models that serve to guide us in our understanding. And we also need what Cheng calls enlivening, the awakening of somatic intelligence informed by models integrated into our bodies, lived in our everyday lives. Archetypes and theoretical formulations need the juiciness of being embodied.

For sixteen years I have been a student of the Diamond Approach, based on the writings and teaching of Hameed Ali in conjunction with Karen Johnson. Hameed is brilliant. Raised in Kuwait, he came to Berkeley to study theoretical physics. Instead he became one of the foremost spiritual teachers of our time. I am deeply grateful to him and to Sandra Maitri, his colleague and my teacher.

From the Diamond Approach I have learned to name the boundless dimensions as Presence and Divine Love, along with Awareness, Unfolding Manifestation, and the Absolute. These Boundless Dimensions are ways of understanding the underlying truth of reality that supports both “I” consciousness and “we” consciousness. These dimensions are recognized in every advanced spiritual gestalt.

Learning from our Ancient Ancestors Several years ago I asked my personal teacher Willa Rothman about how to integrate my experience of the animal spirits into my work with the Diamond Approach. She referenced some students who practiced North American Plains Indians practices of sweat lodge. That wasn’t quite what I was looking for. The Ancient Ritual Postures are not limited to North American Indians. (More recently Willa has been teaching about the Indigenous Mind. That is the territory that includes the animal spirits.)

For several years I asked the Old Ones to guide me, in ecstatic trance sessions using Ancient Ritual Postures. Finally I began to understand how to integrate the spirits who take the form of animal spirits with my practice in the Diamond Approach.

The animal spirits are expressions of Being, the Source that we sometimes call Great Spirit, or God, or the Universe. So are gods and goddesses. So are archetypes. Every culture has ways of experiencing the vast alive intelligent and loving Presence in manifest form. I have learned about “we” consciousness from the animal spirits and the Old Ones. The practice with the Ritual Postures makes possible non-ordinary states of consciousness in which that wisdom is revealed.

Ancient Ritual Postures and the Shift from ‘I’ to ‘We’

The rediscovery of ancient indigenous artworks as ritual guides sets a foundation for our maturation as a species. By integrating the vast capacities of our ancestors without appropriating the traditions of a particular indigenous people, we learn.

As a white person I am painfully aware of having to face the travesties of my colonial ancestors and rectify their influence on my orientation to the world. At the same time, I am celebrating a means for us to use our bodies to invite access to a universe of meaning that far exceeds the cultural awareness of the world into which I was born in the United States. As a privileged white woman, I hope that I can bring into the wider collective awareness not just an appreciation for the artwork of humans who lived 40,000 years ago. It is my deep desire to make available their amazing cognitive understanding of the Universe and how to live in grace on Planet Earth.

When we shift from “I” to “WE,” we move from illness to wellness.