WHAT ARE RITUAL POSTURES? 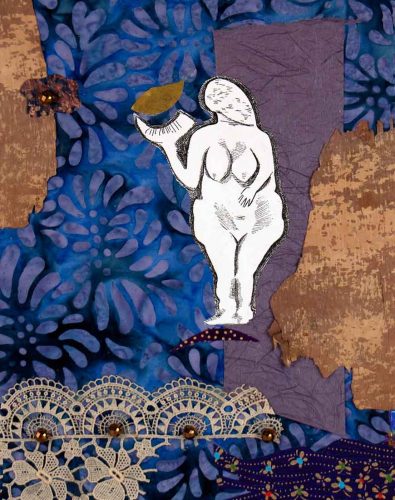 Beginning at least 36,000 years ago indigenous people around the world were creating works of art in the form of ritual body postures. Think Lascaux Cave and the Venus of Laussel. These images were painted on cave walls, carved in slate, and sculpted in stone. We can see them – along with later totem poles, terra cotta effigies, and figures in gold and silver – in museums and archeological collections everywhere. Archeologists often describe them fertility symbols or funerary objects, without understanding their function as visual instructions for rituals to connect with the world of spirits. By using the Cuyamungue Method and ritual postures we honor our ancestors. We embrace our heritage as humans, calling upon the embedded skill of the human body – this common denominator that connects us with all of humanity for at least the past 40,000 years – to restore our sense of place in the larger Reality that includes the invisible world of the Alternate Reality .

Felicitas Goodman, an internationally respected anthropologist and my good friend, discovered in her research in the 1970’s that these very specific body positions can be used in a ritual context to impact the nervous system in a special way. She found that a specific posture along with breath and a rhythmic sound will activate a human body’s natural capacity for expanded states of awareness. Inner doorways open. When I was trying to describe the experience to a friend back in my early days of using ritual postures, I said it was like dreaming but being fully awake. Anthropologists call it the Religious Altered State of Consciousness.

Felicitas called the invisible world the Alternate Reality. Humans have a long history of finding the Alternate Reality through some kind of prayer or ritual. Ancient Ritual Pos-tures are intended to bring us into relationship with the spirits that traditionally provided meaning and guidance in the lives of our most ancient ancestors. Those spirits are still active today if we know how to call upon them.

Praying, I have discovered, is not something you only do with words or in your heart. Prayer can also be accomplished with your body. An old and very complex approach to body prayers involves doing something to the body to cue an altered state of conscious-ness. Things like ingesting a psychotropic plant, exposure to extreme cold, sleep deprivation, fasting, or spinning like the Sufi dervishes and children on a merry-go-round. The body changes and opens to spirit. Then we can communicate our prayers without words.

Ritual means doing things in an orderly way to achieve a purpose. A combination of rituals makes a ceremony, marking something as having special importance. A series of rituals and ceremonies makes a tradition. “A good ritual,” writes spiritual teacher Adyashanti, “ is meant to evoke the mystery of being, the mystery of our own existence, the mystery of life, the mystery of God…That’s really what ritual is for – to put us in touch with that sense of eternity, with the sense of the sacred.”
In the practice of using ritual postures – we call it The Cuyamungue Method, after the Cuyamungue Institute that Dr. Goodman founded – we combine a breathing practice to help with focus, then a rhythmic sound like drumming or rattling to cue the nervous sys-tem. Then we hold a ritual posture for fifteen minutes. It’s that simple. The posture IS the ritual. The body does the work and the mind quietly observes.

Advanced neurobiological research in the 1990’s paved the way for understanding that the “brain” actually operates throughout the body. We have centers of intelligence in the belly and the heart as well as in the head, and when all three centers are activated and aligned, we blossom into higher or more expanded levels of awareness. Using Ritual Postures with the method we teach, cultivates this alignment.

The details of the Cuyamungue Method will be outlined in a later article. My intention here is to draw your attention to the presence of ritual postures and to understand the fundamental characteristics of their usefulness.

How You Can Use Ritual Postures

To help organize our understanding of the uses of the ancient ritual postures, Felicitas selected a few categories: healing, divination, metamorphosis, spirit journeys and initiation. There are several minor themes as well, including postures for ritual and celebration, along with exploration of living myths. These themes are simply ways we can understand the differences that show up when we use one ritual posture as compared with another.

Let’s explore what each category means.

Healing in traditional terms means to make whole. In one sense all the ritual postures support healing or becoming more whole. Some postures facilitate moving energy to specific parts of the body while other postures deal with transferring energy to other people to help in healing them. When COVID19 was first emerging, my Sunday night group chose the Carchi Woman posture to contribute healing energy to place all over the world. Many of us experienced guidance that the best contribution we could make was to not get caught up in drama but to stay present and aligned with spirit. That would help restore balance at a new level on the planet and thus promote healing.

Divination means to discover what is hidden. The diviner in a village is the specialist who is skilled in seeing the bigger picture as well as burrowing under the appearance of things to find out what lies underneath. It is less about prediction than an exploration of how the flow of events comes together. When my posture group called on the Pawnee Pipe postures fo ask what to do in the midst of COVID19, we were told, “The past is gone. Be compassionate toward people sho are afraid. Stay present and surrender to changes that are beyond your control.”
In shamanism, metamorphosis is sometimes called Shape-Shifting. In the practice of ritual postures, metamorphosis means changing the form or quality of a thing or a person into a different form or quality. The metamorphosis ritual allows us to practice inhabiting a different form other than our familiar bodies. In other words, we can experience what it might be like to be an animal or a plant, to learn how the world seems from a different perspective and how we can expand the limitations of our self-imposed boundaries. I relish becoming like a jaguar and feeling the power in my feline body. It helps me to know how to embody power as a woman and in a human form.

Traditionally, Spirit Journeys are focused on traveling up and down the Tree of the World, the central axis of all creation. The Lower World is the roots, the Middle World the trunk of the tree and the Sky World is the upper branches. In these journeys we re-main fully conscious in the physical body, in the here and now, regardless of where we are traveling in the Alternate Reality.
Initiation rituals are intended to mark the cycles of life. Engaging in these rituals takes us through the process of budding, blossoming, bearing fruit, decaying and finally being reborn in the following spring. In human terms the essential stages are birth, maturation, death, and rebirth. Many of these postures help us learn how to die, a powerful wisdom that Western cultures tend to overlook

How Do You Know If An Artifact Is A Ritual Posture?

People often ask, “How do you know if an artifact is in fact a ritual posture?” The care-ful attention devoted to creating specific details in the artifacts we have studied is one indication that this was no random design. And when we discover a similar posture with the same details in another part of the world, it is a good indication that this was certainly a traditional pose somehow shared by people in vastly different geographic regions.

When I was working with Dr. Goodman, who died in 2005, we usually experimented with a new posture with several groups, maybe in Europe as well as in the United States, to look for similarities among participants’ experiences. In that way we could identify if a posture indeed mediated contact with the Alternate Reality and also look for characteristics that defined a category for the posture.

However, we were mindful that in the initial phases of determining whether a pose was a ritual posture our perception could be compromised by several factors. For instance, divination rituals are best understood in the context of response to a question. When no question is posed nothing seems to be happening. We have learned to try adding a question before the ritual, just in case the purpose of the posture is to mediate answering a query. Similarly, metamorphosis requires considerable energy to sustain, so early encounters have been frustrating and without clarity. We have learned to try again before discounting a posture as being useful as a ritual.

Different groups report different kinds of experiences. The collective worldview of a group, what we would call the shared culture, will impact that kind of experiences mem-bers of that group will have. German practitioners might report a different overall re-sponse to a new posture as compared with a group in the Seattle area of the Pacific Northwest. Or the shared culture of yoga teachers could influence how that group would perceive and make sense of what occurs. Also, the group members’ relative sophistication in interacting with the Alternate Reality will also affect what they encounter during the ritual and how they are affected by it. There is so much to pay attention to and we are inadvertently selective in what we notice and report on later. Therefore there is an art to discerning not only whether a pose is indeed a ritual posture and, if it is, what category best defines its purpose.

If you want to explore ritual postures you might begin by finding books that display photographs of artifacts from early cultures. The First Nation peoples of Canada incorporate ritual postures in totem poles and wood carvings. Pre-Columbian art from North and South America is full of examples. The indigenous Hopewell and Mississippian cultures in the U.S. Midwest where I live had wonderful ceramic effigy pipes and carvings that are ritual postures. In addition to the ancient OImec, Maya and Aztec, there were many other cultures in Mexico that produced terra cotta figures in distinctive poses. There are figures throughout South America, from tribes too numerous to name. A certified teacher in Argentina created a series of replicas of postures just from tribes in the northwest region of that country. Mediterranean countries, including Egypt, Crete, Greece and the early societies in the Fertile Crescent, have remnants of ritual postures from their indigenous forebears. In the rich and varied societies in Africa there are many example of ritual postures, mostly in wood carvings. Maria Gimbutas’ exploration of Old Europe brought to public attention artifacts of ritual postures from that part of the world.

It is harder to find the indigenous roots in Chinese, Japanese and Indian traditions. In Tibet the Bonpo religion preceded Buddhism and still has some ritual postures. When I was in Hong Kong fifteen year ago I talked with an English physician who collected very early Chinese artifacts that appeared to be ritual postures. Our meeting was brief, not long enough to photograph and experiment with the poses.

I’m looking forward to sharing more of these beautiful artifacts with you and to introduce you to The Cuyamungue Method as a practice that can deeply enrich your life.